Are parents killing their kids with kindness? Are they making their own kids addicted? Do you offer sweet poison to your little one because you love and can’t say NO to her or him?

Somewhere I read the quote “Soda: Tobacco of the 21st century”.

Initially I thought everybody does know the ill effects of soda/aerated drinks/soft drinks/ Coke/Pepsi etc. And it may not need a separate article until I saw something really disturbing one day on traffic signal. A very sweet girl around only 3 years old with a can in her hand sitting very comfortably in her luxury car was teasing me with cute naughty expressions while sipping on her Coke.

Her mother smiled back at me and conveyed her apologies through her expressions. I was doing thumbs down to her with a funny face looking at her ‘can’ which she failed to understand. Her mother hopefully may have understood my thumbs down act. Traffic light turned green and our teasing game stopped. But that incident made me think, why? Why soft drink to such a small girl? Why soft drink to any child of any age?

As an adult with enough maturity to understand what is good and bad, if you want to play with your health, play. But nobody has right to do the same with the children.

Sad but true almost three generations had sank in the ocean of soft drinks. Hands full of fast food and a can of Soda! Unfortunately we Indians too walked far long on the path following the foot prints of Americans.

Do you know when your kid hold the can of cold drink what exactly he or she is holding in hand?

The toxic contents of soda:

Do you know what happen to your body in the first 60 minutes, after you drink Soda/Pepsi/Coke or other soft drinks?

Now imagine the consequences if you or your child drinks soda regularly or even occasionally too!

Are these enough reasons for all of those who drink soft drinks/Soda or offer it to their kids, to stop consuming it? 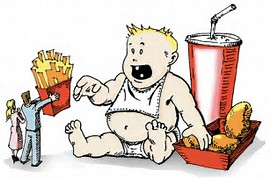 I have not covered the topics like how the soft drinks industry destroyed the whole generation’s health and the economy behind it and its close relation with health and medicine industry and policies of nation. The reason is, I am more concerned with the health of people around me rather than some economic or political scandal.

To educate my readers about the facts that some of you may not know before is the purpose of this article. I am worried for small towns. The Soda industry suffering huge loss in America and other big countries and metro cities in India and some other countries. To overcome the loss these companies are targeting the small towns and less aware customers. The funda to captures the hearts of innocent rather ignorant I will say, is the same, advertisement. Bollywood actors and actresses getting paid huge money to destroy the health of their fans, followers and loving people.

God save this mind set and innocent people.

(The write up belongs to Dr.Rupali Panse.The images and some data and facts are derived from authorised sources.Do not change the original article while sharing or reposting it.)

Rupali Panse is an Ayurveda Consultant and have genuine passion about Natural Healing. Nutrition and food medicine is her another unique area of work. She provides private consultations for physical and mental wellness using healing properties of food and plant medicines. She has vast experience of 20 years in the field of Holistic medicine and Ayurveda. Many people swear by the benefits of Ayurveda diet and lifestyle changes suggested by her. She has her clients living Ayurveda lifestyle from India, Europe, USA , Singapore , Africa and bunch of other places. She has been passionately writing about Ayurveda , Food , Spirituality and Holistic Healing from more than 6 years. As a public speaker she tries to educate the mass about organic living. She is working, as a resource person with esteem universities like Pune University, India and National Institute of Ayurveda, Jaipur (NIA), India. She is vice president of Ayurveda Association of Florida. She teaches for Ayurveda school in USA and India. People keen on learning holistic meal and lifestyle often avails opportunity of one on one education and consultation from her. Along with the graduate degree In Ayurveda she has supported her holistic approach with the certificate in psychology and counseling from renowned University Of Pune, India. Dr.Rupali is always connected with patients and followers through social media, podcasts and webinars. She says, "Its the power of Ayurvedic wisdom that people trust in my advice and follow it faithfully. The positive feedback, cured illnesses and their smiling faces, are the constant source of energy which keep me well, as well.” View all posts by Dr. Rupali Panse

5 thoughts on “The bubbly,frizzy, sweet addiction!!”