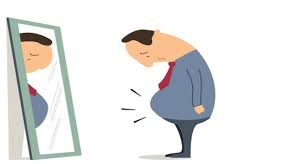 I remember this incident which made me write this blog. It was publication ceremony of my book on food and nutrition ,when one of the guest after a formal talk asked me one question. Yes my readers are welcome to ask their queries anywhere anytime. He knew this ,so he asked it without hesitation.

‘’Mam ,somewhere I read that Indian diet is responsible for the increased fat around abdomen .’’ Is it true?

I promised, “Sure I will write about your query.”

I will put the answers in the form of some facts about obesity or belly fat and some interesting facts about Indian diet. Then you decide the answer.

The rates of obesity and diabetes increased between 2010 and 2014. Today 9.5 percent of adults are diagnosed with diabetes and 4.9 percent with obesity. The number of obese people in developed western countries compared are far more than in India.

If we observed the generalized pattern of Indian food, it is seen as a balanced pattern overall. Cereals, grains ,vegetables and fruits  are the common pattern of any Indian cuisine.

But the recent study suggest that the average consumption of cereals, grains vegetables and fruits is reduced and the consumption of sugar ,ready to eat and packaged food and meat is increased in the decade.

The relation of obesity and above described food is quite obvious. So not Indian food but the reluctance towards traditional Indian food is the reason for the increased obesity.

Moreover  the Indian food can be helpful to reduce the obesity with other needful parameters like exercise, good lifestyle, reducing stress etc.

The Indian food properly consumed is supposed to be the wholesome food.

Why Indian traditional food is good ?

Every Indian is taught a Sanskrit Verse from their childhood which means, ”Food is like oblation that we offer to our body and mind to keep body and soul ,live and pure.” We never offer God bad or evil things.  In a way the verse guides us to choose food correctly. Also it teaches us to respect everything which have contribution in feeding us. It discourages us from abusing the food.  But it seems we are forgetting the gems of knowledge in becoming modern.

These are some of the facts about Indian food which can be used to treat obesity. Indian food causes  Obesity is a myth.

Rupali Panse is an Ayurveda Consultant and have genuine passion about Natural Healing. Nutrition and food medicine is her another unique area of work. She provides private consultations for physical and mental wellness using healing properties of food and plant medicines. She has vast experience of 20 years in the field of Holistic medicine and Ayurveda. Many people swear by the benefits of Ayurveda diet and lifestyle changes suggested by her. She has her clients living Ayurveda lifestyle from India, Europe, USA , Singapore , Africa and bunch of other places. She has been passionately writing about Ayurveda , Food , Spirituality and Holistic Healing from more than 6 years. As a public speaker she tries to educate the mass about organic living. She is working, as a resource person with esteem universities like Pune University, India and National Institute of Ayurveda, Jaipur (NIA), India. She is vice president of Ayurveda Association of Florida. She teaches for Ayurveda school in USA and India. People keen on learning holistic meal and lifestyle often avails opportunity of one on one education and consultation from her. Along with the graduate degree In Ayurveda she has supported her holistic approach with the certificate in psychology and counseling from renowned University Of Pune, India. Dr.Rupali is always connected with patients and followers through social media, podcasts and webinars. She says, "Its the power of Ayurvedic wisdom that people trust in my advice and follow it faithfully. The positive feedback, cured illnesses and their smiling faces, are the constant source of energy which keep me well, as well.” View all posts by Dr. Rupali Panse